After more than four years researching and writing detailed accounts of First World War Guysborough County soldiers' experiences, I have decided that it is time to take this blog in a new direction. Several reasons have prompted this decision. First and foremost, having covered most of the major battalions and units with whom Guysborough County individuals served, it is a challenge to locate new and different stories to tell. Should such a possibility arise in future, I will indeed pursue it.

For the time being, however, this is the first of what I hope will be a series of posts that reflect a new direction. That brings me to the second reason for the change in focus—the fact that we are quickly approaching the one hundredth anniversary of events that are particularly relevant to the experiences of Guysborough County's First World War military personnel.

One such example is the formation of the 193rd Battalion, authorized on January 27, 1916 as the "Cumberland Highlanders" and headquartered in Truro, NS. The 193rd became part of the newly created Nova Scotia Highland Brigade on February 23, 1916. At that time, its initial recruitment area—Cumberland and Colchester Counties—expanded to include Pictou, Antigonish, Guysborough and Hants Counties.

Within weeks, the battalion commenced recruitment in the newly added counties. For the first time since the war's commencement, miitary personnel travelled outside the province's major settlements, visiting small towns and villages a considerable distance from its railroad line. A future post will explore their efforts in Guysborough County, as the 193rd recruiters visited Sherbrooke, Canso and Guysborough town during late March and early April 1916.

Subsequent posts will similarly correspond to the one hundredth anniversary of similar events, highlighting their significance for Guysborough County's soldiers and military personnel. While this represents a new direction, it provides an opportunity to include information on First World War personnel whose names have not appeared elsewhere in this blog, thus acknowledging their contributions to the Great War.

Recent communication with fellow First World War and family history researcher Steve Clifford of Victoria, BC provided the inspiration for today's post. Steve maintains the "Doing Our Bit" military and family history research blog, a site brimming with information about First World War soldiers and events. Steve recently launched the Crowdsource: Valcartier 1914, an effort to identify the Officers pictured in a panoramic photograph taken at Camp Valcartier, QC on August 31, 1914.

Steve's project sparked an examination of data gathered on Guysborough County's First World War soldiers, specifically a search for individuals who were at Valcartier when the photograph was taken. While there are no Guysborough County natives in the panorama—only commissioned officers are pictured—there were several "other ranks" (OR) in camp at that time. This blog post provides a brief introduction to each soldier, followed by an overview of the war service and post-war life of two members of this distinguished group.


*****
Immediately following the August 4, 1914 British declaration of war on Germany, militia units across the country mobilized their personnel. From their ranks came the soldiers who formed the 1st Canadian Contingent, later re-named the 1st Canadian Division. Throughout the month of August, militia units across the country selected the best candidates for overseas service and organized their transportation by train to Camp Valcartier, QC.

In Nova Scotia, each military unit received instructions to select for overseas service "not more than 125 men with officers... from each rural Regiment" and to co-ordinate their transport to Valcartier. On August 20, 125 officers, non-commissioned officers (NCOs) and OR from the 78th Regiment Pictou Highlanders left New Glasgow, NS. The group joined ranks at Truro with similar groups from the 76th Colchester Rifles, 63rd and 66th Halifax Regiments, 75th Lunenburg and 69th Annapolis Regiments, a total of 500 "all ranks" destined for Quebec. 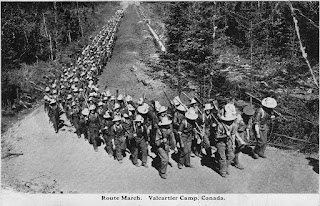 Two other Guysborough County natives arrived at Valcartier with units from other parts of Canada. Charles Berry Hadley, born at Mulgrave, son of Robert H. and Jessie (Till) Hadley, 352 Polson Avenue, Winnipeg, MB, arrived in camp with Lord Strathcona's Horse. John Francis McLean, born at Lakedale, son of John and Ann McLean, was a member of the 5th Regiment (Royal Highlanders of Canada) at the time of his arrival.

A sixth individual with connections to Guysborough County also made his way to Valcartier. Alistair Fraser was born at New Glasgow, NS on March 15, 1886, son of Hon. Duncan Cameron and Elizabeth "Bessie" (Graham) Fraser. Duncan served as Member of Parliament for Guysborough from 1891 to 1904, and the family maintained a summer residence in the county. Alistair enlisted with 27th Light Horse at Moose Jaw, SK on August 5, 1914 and departed for Valcartier with the unit later that month.


*****
Orris Stephen Cooke was born at Isaac’s Harbour, Guysborough County on June 17, 1894 to Russell and Laurel M. (Langley) Cooke, the eldest of ten children. Sometime after 1911, the family relocated to Pictou County. Orris enlisted with the 78th Regiment (Pictou Highlanders) militia unit, and was among a group of volunteers who joined the 17th Battalion at New Glasgow on August 19, 1914. 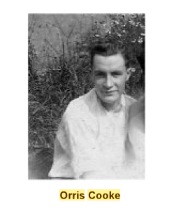 The soldiers made their way to Camp Valcartier, QC, where Orris officially attested for overseas service on September 26. After arriving in England, he was transferred to the 15th Battalion (48th Highlanders of Canada) on July 15, 1915. Orris served with the 15th in Belgium’s Ypres Salient, relocating with the unit to the Somme region of France in September 1916.

Promoted to the rank of Lance Corporal on December 29, 1916, Orris participated in the Canadian Corps’ famous April 9, 1917 attack on Vimy Ridge, France. During the fighting, he received a serious shrapnel wound to his head. He was evacuated to hospital at Wimereux, France, where surgeons removed shrapnel and bone fragments from the wounded area, leaving a triangular gap about the size of a 50 cent piece in the rear left, parieto-occipital region of his skull.

While doctors initially inserted a steel plate, they later removed parts of his ribs and used the bone to repair his skull. In later years, Orris took delight in scratching the spot on his head and joking, "Not many can scratch their ribs like this."

Listed as  “dangerously ill” for several weeks, Orris was invalided to England on May 20 as soon as his condition allowed. As he recovered, Orris reported suffering from headaches, dizziness and impaired vision, and experienced agitation after any exertion. Invalided to Canada on September 13, he spent several months at Pine Hill Hospital, Halifax. Discharged as “medically unfit” on February 14, 1917, he returned home to New Glasgow. 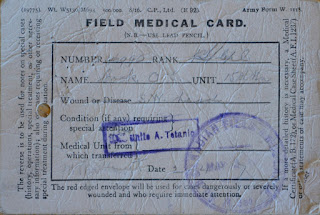 Orris married Vera Langley, another Isaac’s Harbour native, at New Glasgow on December 4, 1918. The couple had one son, Chester. The family lived in Timmons, Ontario for a period of time during the 1920s, eventually returning to Springville,  Pictou County, where Orris's parents had settled in their later years.

A master carpenter, cabinet maker and gunsmith, Orris was also actively involved with the Boy Scouts of Canada. After Vera passed away in 1952, Orris married Florence Davidson, remaining in his Springville home until his death on September 1, 1971. He was laid to rest in Springville Cemetery.

*****
Alistair Fraser was born at New Glasgow, NS on March 15, 1886 to Hon. Duncan Cameron and Elizabeth “Bessie” (Graham) Fraser. His father, Duncan, was Member of Parliament for Guysborough from 1891 to 1904, at which time he was appointed to the Nova Scotia Supreme Court. Duncan was appointed as Lieutenant-Governor of Nova Scotia in 1906, serving in that capacity until his untimely death in 1910. 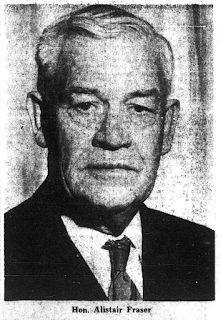 Duncan's widow, Bessie, relocated to her daughter’s residence in Moose Jaw, SK, while Alistair completed a law degree at Dalhousie University. Upon graduation, Alistair rejoined the family and established a law practice in Moose Jaw. On August 5, 1914—within hours of Britain’s declaration of war on Germany—Alistair enlisted with 27th Light Horse (Moose Jaw, SK) and set out for Camp Valcartier, QC with the unit later that month.

After arriving in England with the 1st Contingent, Alistair received a commission as Lieutenant and attested with 17th Battalion (Nova Scotia) at Sling Plantation on January 8, 1915. After the 17th was reduced to the status of a reserve battalion, Alistair received a transfer to Princess Patricia's Canadian Light Infantry on May 24, 1915, crossed the English Channel to France, and joined the PPCLI's ranks in Belgium's Ypres Salient.

Alistair quickly rose through the ranks, receiving a promotion to Captain on December 31, 1915, followed by further advancement to Temporary Major and Company commander on July 1, 1916. In early December, he received a transfer to the 15th Battalion (48th Highlanders of Canada), the same unit with which Orris Cooke was posted.

Alistair served with particular distinction at Vimy Ridge (April 9, 1917), receiving the Military Cross for bravery in the field. His citation card described his actions during the successful attack:

"For conspicuous gallantry and devotion to duty. He led his Company with great courage and skill. He gained his first objective, where he was wounded, but continued on, reaching the second. Here he was again wounded, and forced to remain where he was. He showed the finest example of coolness and courage under fire."
Seriously wounded and exhausted by almost two years' service at the front, Alistair was invalided to England, where he received an extended leave, returning to Canada for a period of time. Upon reporting for duty to England, he held a number of administrative posts in London throughout the winter of 1917-18, until he was appointed Aide de Camp to General Arthur Currie, Canadian Corps Commander, on March 4, 1918.

Alistair spent less than a month in this new position. Greatly affected by the death of his younger brother, Lieutenant James Gibson Laurier Fraser, in combat near Lens, France on March 4, 1918, Alistair returned to England in April. Further impacted by the loss of his sister, Margaret Marjorie "Pearl" Fraser, who perished at sea when a German U-boat sank the Hospital Ship Llandovery Castle off the Irish coast on June 27, 1918, Alistair eventually returned to Canada, where he held administrative posts with the Canadian Corps until his discharge on January 31, 1919.

Returning to civilian life, Alistair became general solicitor for Canadian National Railways (CNR), receiving an appointment as King's Counsel in 1921. He rose to the position of CNR vice-president in charge of railroad traffic in 1932, a position he held until his retirement in 1951.

The following year, he was appointed Lieutenant-Governor of Nova Scotia, a position held years earlier by his father. Upon completing his term in 1958, he retired to the family property near Guysborough town. Alistair Fraser passed away at St. Martha's Hospital, Antigonish on January 24, 1964, following a brief illness.


Thank you to Malcolm Silver, Orris Cooke's second cousin, for providing information on his life.
Posted by Bruce MacDonald at 19:49 No comments: