Abram Arthur Munro was born at Whitehead, Guysborough County, on February 22, 1892, the second of Elizabeth “Lizzie” (Greencorn) and Arthur MacPherson Munro’s seven children and the couple’s eldest son. Lizzie passed away on November 27, 1905, leaving Arthur to provide for a large family.
At a young age, Abram went to work in the local fishery alongside his father. Further tragedy struck the family on October 8, 1915, when a house fire claimed the lives of Abram’s father, Arthur, and two of his younger brothers. The following spring, military recruiters visited the Canso area, seeking recruits for the 193rd Battalion. Abram answered the call, enlisting with the unit on April 1, 1916.

Shortly after the Brigade arrived in England, two of its units—the 193rd and 219th Battalions—were dissolved and their members assigned to other units. On January 23, 1917, Abram was assigned to the 17th Reserve Battalion, the unit responsible for reinforcing Nova Scotian units at the front.  Three months later, he was assigned to the 85th Battalion and crossed the English Channel to France.

Abram joined the 85th in the forward area on April 26, 1917. Throughout the spring and early summer, he served a regular rotation with his new unit. While slightly wounded in the trenches on June 17, Abram remained at duty. A second incident that occurred two months later, however, proved to be much more serious.

On August 5, 1917, Abram was admitted to No. 5 Field Ambulance, having been “hit by [a] fragment of high explosive shell.” The following day, he was transported to No. 6 Casualty Clearing Station with serious wounds to his lower left arm and thigh. Damage to Abram’s arm was so severe that surgeons amputated the limb two inches below his left elbow. A subsequent x-ray revealed a “shrapnel fracture” at the upper end of his femur, with “multiple fine shrapnel about the site of injury.”

Abram was evacuated by ambulance train to No. 4 General Hospital, Camiers, on August 10 and remained a patient at the facility for almost two and a half months. On October 28, he was invalided to England and admitted to 1st Southern General Hospital, Dudley Road, Birmingham. “Foreign bodies” and a bone fragment still remained at the tip of Abram’s left femur, reducing his ability to place weight on the leg.

Throughout the winter of 1917-18, Abram gradually achieved limited use of his injured leg and made sufficient progress to warrant a transfer to Granville Special Hospital, Buxton, on May 30, 1918. While “ambulatory with crutches,” Abram had limited joint movement at the hip, knee and ankle, and only slight toe movement. On July 8, he was transferred to No. 5 Canadian General Hospital, Kirkdale, Liverpool, in anticipation of a return voyage to Canada, but did not depart for home until September 20, 1918.

Upon arriving at Halifax 11 days later, Abram travelled by train to Toronto, where he was admitted to Whitby Military Hospital on October 5. In subsequent weeks, staff focused on fitting Abram with an artificial arm. As a result of his fractured femur, his left leg was three inches shorter than the right, necessitating the use of a “cork lift” in his left boot.

On December 4, 1918, Abram was transferred to Base Hospital, Toronto. One month later—January 2, 1919—he married Gladys Evelyn (Leach) Jackson, a 23-year-old widow and native of Leamington, ON. Abram’s marriage license listed his occupation at the time as “tailor (retired soldier).”

By early June 1919, the Toronto facility felt it had done all it could for Abram and he returned to Halifax, where he was admitted to Camp Hill Hospital. While his artificial arm was deemed “of little value,” the use of his left leg had improved sufficiently to permit walking with “the aid of a stick.”

Abram remained under medical care throughout the summer and autumn months, during which time he underwent surgery in mid-October to remove an abscess from the top of his left femur. By early December, Abram had recovered sufficiently to be assigned to the local Casualty Company. On December 27, 1919, he was formally discharged from military service and returned to Ontario, where he and his wife established residence at Pickering.

For more than a decade, Abram’s health was stable. During the spring of 1931, however, he began to experience problems with his left leg wound. By October 1934, Abram had developed osteomyelitis—a bone infection—in his left femur, “with widespread cellulitis and marked toxaemia.” Abram was admitted to Christie Street Hospital, Toronto, where surgeons drained a large abscess. Before year’s end, he underwent three additional procedures and received two blood transfusions.

Despite the medical interventions, Abram’s health continued to decline. Within 24 hours of developing “nephritis with anuria [non-passage of urine],” Abram Munro passed away on January 30, 1935 and was laid to rest in Mount Hope Cemetery, Toronto. Military authorities agreed that his death was “due to service” and provided an Imperial War Graves Commission headstone to mark Abram’s final resting place.
Abram’s story is one of 64 profiles contained in Bantry Publishing’s First World War Honour Roll of Guysborough County, Nova Scotia, Volume II: 1918 - 1937, available for purchase online at bantrypublishing.ca .
Posted by Bruce MacDonald at 00:01 No comments:

Buckley Andrew Armsworthy was born at Halfway Cove, Guysborough County, on May 14, 1896, the sixth of Abigail (Cox) and Freeman Armsworthy’s seven children. The youngest of the couple’s four sons, Buckley grew into a tall lad, standing six feet one and a half inches and weighing 155 pounds at the time of his April 1, 1916 enlistment with the 193rd Battalion at Canso, NS.

Shortly after its overseas arrival, two of the Highland Brigade’s four units—the 193rd and 219th—were disbanded and their members dispersed to other units. Buckley was part of a draft of 250 reinforcements assigned to the 42nd Battalion (Royal Highlanders of Canada) on December 5, 1916. The soldiers departed for France the following day and joined their new unit in the field on January 3, 1917.

Buckley and his inexperienced comrades immediately commenced regular tours in sectors near Arras, France. On the morning of April 9, 1917, the 42nd participated in the Canadian Corps’ attack on Vimy Ridge, its soldiers advancing up a sector of the escarpment immediately adjacent to Hill 145. While the unit gradually secured its objectives, the 11th Brigade’s failure to capture the adjacent hill subjected its left flank to devastating German fire throughout the day, inflicting significant casualties.

The situation was resolved during the early evening hours, when two Companies of the 85th Battalion (Nova Scotia Highlanders) succeeded in securing Hill 145’s western slope before nightfall. The 42nd remained in the line until the morning of April 11, incurring almost 300 casualties during its Vimy tour. Buckley came through his first combat experience without injury and served regular rotations with the 42nd in sectors beyond the captured ridge throughout the spring and early summer of 1917.

As the 42nd prepared to enter the Avion sector’s trenches on the night of July 2/3, German artillery fire struck the location where its soldiers were assembling, wounding nine “other ranks” (OR). Buckley was one of the casualties and was admitted to field ambulance for treatment of a wound to his left hand. Evacuated to No. 20 British Hospital, Camiers, France, shortly afterward, he was invalided to England on July 7 and admitted to the City of London Military Hospital, Clapton.

Buckley’s wounded hand quickly healed, resulting in a mid-August transfer to Holburn Military Hospital, Mitchum, where staff focused on massage therapy to restore finger movement. On October 30, he was discharged from medical care and reported to the 2nd Canadian Corps Depot, Bramshott.  Buckley spent the winter of 1917-18 at the camp and was assigned to the 20th Reserve Battalion—the unit that provided reinforcements for the 42nd—on February 16, 1918.

While documents in his service file contain no information to suggest that he was unfit for combat duty, Buckley was transferred to the Canadian Army Medical Corps (CAMC) on June 18 and joined the staff of the Canadian Convalescent Hospital, Bromley, four days later. He served with the unit for four months, most likely as an orderly. On October 10, Buckley was transferred to No. 16 Canadian General Hospital, Orpington, Kent. Within a week, he was admitted to the facility, having experienced an “epileptiform seizure.”

The incident had occurred while on duty, subsequent medical notes indicating that Buckley had experienced his first seizure in the spring of 1917 and at least six more since that time. He also reported symptoms of dizziness and feeling faint. On the morning of October 24, 1918, Buckley experienced another seizure, prompting staff to recommend a thorough examination at an “ENT clinic.” He remained a patient until November 8, when he was assigned to the CAMC Casualty Company and awaited a decision on his fate.

Transferred to No. 5 Canadian General Hospital, Kirkdale, Liverpool, on January 5, 1919, Buckley received a thorough medical examination in preparation for his return to Canada. Nine days later, he boarded the hospital ship Essiquibo and arrived at Halifax, NS, on January 26. He immediately reported to the Hospital Section, Pine Hill, where medical staff reported a previously unreported health issue—Buckley was suffering from varicose veins on both legs, a problem that had apparently plagued him since his October 1916 overseas arrival.

When Buckley declined to have surgery to rectify the problem, medical staff concluded that the condition was “permanent” and recommended that he be discharged as “medically unfit.” On March 4, 1919, Buckley was transferred to the Halifax Casualty Company. One week later, he was formally discharged from military service and returned home.

For almost two years, there is no information available to suggest that Buckley experienced any health problems. Sometime during the winter of 1920-21, however, he developed “frontal sinusitis” and was admitted to Aberdeen Hospital, New Glasgow, NS, on January 10, 1921. While surgeons operated 11 days after his admission, the condition led to the development of a brain infection.

Buckley Andrew Armsworthy passed away at 4:00 p.m. January 29, 1921, the cause of death listed as an “abscess of [the] brain.” His remains were transported to Canso, where he was laid to rest in All Saints Anglican Church Cemetery. On December 1, 1926, the Canadian government agreed that Buckley’s death was “related to [military] service” and approved the provision of a standard military headstone for his final resting place.

While the November 11, 1918 Armistice signed by the First World War’s major combatants brought more than four years of fighting to an end, the deaths of military personnel from causes related to military service continued for months—even years—afterward. 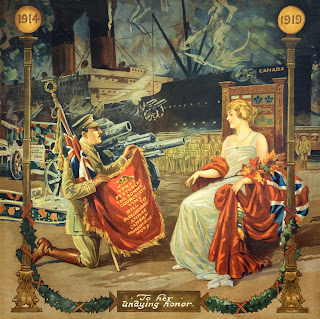 In the case of Guysborough County’s soldiers, four died before the end of 1918. One death—Corporal William Thomas Uloth, MM—the result of a tragic accident, while three—Privates John J. Rabbie, Lester Dean Hodgson and Martin Joseph Fogarty—were due to sickness. A brief summary of their stories has been published on this blog, on the 100th anniversary of their deaths.

Since May 2016, I have remembered each fallen Guysborough County soldier on the 100th anniversary of his/her passing. In order to acknowledge the remaining First World War fatalities in a timely fashion, I have decided to post their stories during the 2019 calendar year, on the date of each person’s passing.

While the majority of deaths occurred shortly after the war’s conclusion, the posts will cover a span of 18 years, something that is difficult to imagine. Although causes of death varied considerably, Canadian authorities acknowledged that each death was the result of a soldier’s overseas service.

During the 2019 calendar year, the following soldiers’ stories will be posted on this blog:

Posted by Bruce MacDonald at 15:17 No comments:

On December 28, 1918, the Canso News, the Nova Scotia community’s weekly newspaper, remembered the community’s First World War soldiers in its weekly edition. The cover page displayed the photographs of soldiers who died in service, while the second page contained an extensive list of the wounded.

The two images are reproduced here, for the benefit of family descendants. “We will remember them,” both the deceased and the wounded, who sacrificed so much in service to their country.
Posted by Bruce MacDonald at 11:10 No comments: