On May 30, 1916, the Guysborough detachment of the 193rd Battalion departed the town for Camp Aldershot, near Kentville, NS. The unit, authorized on January 27, 1916 with its headquarters at Truro, NS, became part of the Nova Scotia Highland Brigade on February 13.

The “brainchild” of Lieutenant-Colonel Allison Hart Borden, Commanding Officer (CO) of the 85th Battalion (Nova Scotia Highlanders), the Brigade consisted of four battalions. The 85th, its senior unit, was authorized on September 14, 1915 and recruited to full strength within two months. The overwhelming response to its formation convinced Borden that the province’s population could provide the additional three units required to form a brigade. Upon receiving approval from military authorities, the 193rd joined the Brigade’s ranks, alongside two new battalions. The 185th Battalion (Cape Breton Highlanders) was authorized on February 1, 1916, followed by the 219th Battalion (Halifax - South Shore - Annapolis Valley) shortly afterwards.

Throughout the months of March and April, military recruiters visited towns and villages of Nova Scotia in search of volunteers for the three new battalions. The 193rd’s officials canvassed northeastern Nova Scotia—Cumberland, Colchester, Pictou, Antigonish, Guysborough and Hants Counties—visiting smaller settlements such as Sherbrooke, Canso and Guysborough town for the first time since the war began in early August 1914.

The entire Brigade was recruited to full strength within three weeks, the new units establishing detachments and immediately commencing training in the province’s larger towns and villages. During the last week of May 1916, the Brigade commenced its mobilization at Camp Aldershot, marking the beginning of a summer-long schedule of military drill and route marches. On May 30, the Guysborough detachment marched along the town’s main street to the pier, boarded the coastal steamer LaTour and travelled to Mulgrave for the train ride to Aldershot.

At the height of training, Camp Aldershot contained more than 7000 soldiers, the four units gradually whittling their numbers down to the standard strength of approximately 1,000 “other ranks” (OR). In August, military officials authorized formation of the 246th Battalion. The new unit accommodated soldiers released from Brigade units, but still considered suitable candidates for infantry service, pending additional training. The 246th subsequently attempted to fulfil its role as the Brigade’s designated “reinforcing battalion,” soliciting recruits across the province.

On August 25, Aldershot opened its doors to the public for two days. Over 8,000 Nova Scotians flocked to the camp, HRH the Duke of Connaught, Governor-General of Canada, reviewing the Brigade’s troops in a March Past held the following day. Personnel commenced preparations for their overseas departure the following month, Lt.-Col. Borden departing for England on September 9, eventually making his way to France to observe conditions at the front. In his absence, Lt.-Col. John Stanfield, the 193rd’s CO, assumed command of the Brigade. On September 26, Lady Borden, wife of Sir Robert Borden, Canadian Prime Minister and the Brigade’s Honorary Colonel, presented the King’s and Battalion Colours to each unit.

At month’s end, the Brigade staged a “grand gymkhana,” consisting of “interesting and amusing sporting events” traditionally referred to as “Scotch Games,” according to Lieutenant-Colonel Joseph Hayes, the 85th’s Medical Officer and post-war chronicler. Having fulfilled its ceremonial, public relations and recreational duties, the Brigade commenced final preparations for its overseas departure. Amongst the various tasks was the assembly and publication of A Short History & Photographic Record of the Nova Scotia Overseas Highland Brigade, C. E. F., containing a brief description of each unit’s origin and portraits of its initial personnel.

On October 11, the 85th travelled to Halifax by train, marching directly to the docks and boarding HMT Olympic as it lay at anchor in Bedford Basin. Sister ship to the ill-fated Titanic, the vessel’s hull bore a camouflage design, intended to hinder detection by German U-boats as it crossed the North Atlantic. The 185th came aboard before day’s end, while the 193rd and 219th arrived the following day. Just before dusk on October 13, HMT Olympic weighed anchor and departed Halifax for England.

Unfortunately, military authorities disbanded the Brigade before year’s end, due largely to the significant numbers of Canadian Corps casualties incurred at the Somme, France during the months of September to November 1916. Two of the Brigade’s four units—the 193rd and 219th—were dissolved, their soldiers reassigned to existing units in the field. Before war’s end, however, virtually all of the 193rd’s initial recruits saw action at the front. Some did not return home, while others were wounded in combat or became ill during service and were “invalided” to Canada. Even those who came through the fray without physical injury carried the psychological effects of the 20th century’s first modern war for the remainder of their days.
Posted by Bruce MacDonald at 10:01 No comments:

On May 9, 1916, three young men—all telegraphists employed by the Commercial Cable Company, Hazel Hill, Guysborough County—attested for overseas service with the 193rd Battalion at Canso, NS. The fact that their attestation numbers are sequential indicates that they stood in line together as they signed their papers. Very close in age, the trio were quite likely friends who decided it was time to serve their country. Not surprisingly, two later served with signalling companies in the forward area. 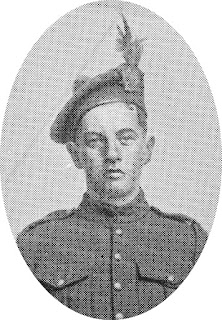 Arthur was born at Canso on October 5, 1897 to John and Elizabeth (Munroe) Cousins. He crossed the North Atlantic to England with the 193rd Battalion, and was transferred to the 185th Battalion (Cape Breton Highlanders) on December 29, 1916 when the 193rd was dissolved. Arthur was subsequently transferred to the 5th Canadian Divisional Signalling Company on August 17, 1917. He immediately entered a wireless training course and crossed to France on March 18, 1918. Arthur was subsequently assigned to the 1st Canadian Divisional Signalling Company, serving in France and Belgium for the remainder of the war. Arthur was discharged from military service on April 27, 1919 and subsequently relocated to the United States, taking up residence in New York City. 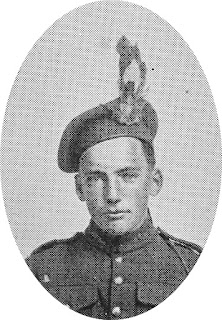 Basil was born at Canso on May 11, 1898 to Enos and Sarah A. (Hurst) Goodwin. Basil also departed for England aboard SS Olympic on October 13 and was transferred to the 185th Battalion on December 19, 1916. Unlike his two Cable Company comrades, however, Basil’s service followed a different path. He was assigned to the 17th Reserve Battalion (Nova Scotia) on February 23, 1918 and subsequently transferred to the 25th Battalion (Nova Scotia) on March 28, 1918. Basil served in the forward area with the 25th for the duration of the war and was discharged from military service on May 25, 1919. He relocated to the Boston, MA area in the early 1920s and married, passing away at Burlington, VT on November 3, 1967. 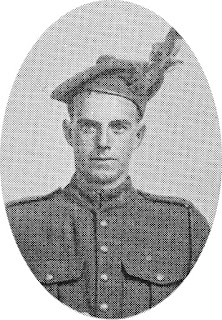 Laurie was born at Hazel Hill on March 28, 1897 to James and Maude (Defrancheville) Graham. He crossed to England with his two comrades and was also transferred to the 185th Battalion on December 29, 1916. He followed Arthur to the 5th Canadian Divisional Signalling Company on August 17, 1917 and subsequently completed the wireless training course. Laurie crossed the English Channel to France with Arthur on March 18, 1918 and was assigned to the 4th Divisional Signalling Company on July 1, 1918. He served in the forward area for the remainder of the war and was discharged from military service on June 8, 1919. Laurie married Hannah M. Mackenzie, a native of Margaree, Inverness County, in 1927 and the couple subsequently raised a family of three children. Laurie passed away at Antigonish, NS on February 27, 1977.
Posted by Bruce MacDonald at 12:41 No comments:

Since commencing work on this blog almost five years ago, I have received numerous requests for information on First World War soldiers from various parts of Canada and have endeavored to respond to the best of my ability. The most recent request is an intriguing one that I am unable to answer. Perhaps, with some luck, somebody reading this post can offer assistance.

A gentleman from Scotland, seeking to identify a First World War soldier in a family photograph, located the pictures of James Leo "Jimmy" McDonald posted on this blog in February 2012 and realized that the collar pins—Canadian Forestry Corps—were identical. The photograph in question was taken in the Jedburgh, Scotland area, where two CFC Companies—127th and 139th—operated during 1917 and 1918.

The coincidence led the individual to conclude that the soldier question served with one of the two CFC Companies. While that reduces the number of possible matches considerably, there is no way to identify the individual other than locating a person who may recognize the photo. So here is the image:

The soldier is pictured next to a young child, the grandmother of the person who owns the photograph. Apparently, the soldier had befriended the family during his time at Jedburgh, but his identity was lost over the years.

The family hopes to identify him, with the goal of contacting a living descendant in Canada as we approach the 100th anniversary of the Canadian Foresty Corps' service in Scotland. If you have any suggestions as to how to identify the soldier, or if you think you know who he is, please contact me by e-mail or leave a comment below.
Posted by Bruce MacDonald at 20:35 5 comments: