Daniel Angus Chisholm was born at Salmon River Lake, Guysborough County, on February 8, 1879, the fifth of Andrew and Catherine (Boyle) Chisholm’s 11 children. His parents married at St. Andrews, NS, in 1873. Their first six children were born while the couple was living at Salmon River Lake. Around 1884, the family relocated to Caledonia Mills, where their remaining five children were born. A son, Angus, and a daughter, Margaret Ann, passed away in the late 1890s. 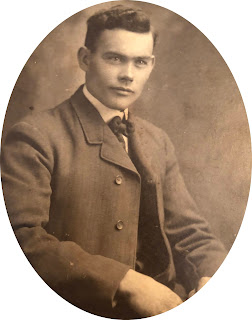 Following their father Andrew’s death in 1901, the Chisholm siblings gradually left for the United States. The eldest, Roderick, was the first to depart, establishing residence in New York. When their mother, Catherine, passed away in 1904, the others followed Roderick’s example, the last and youngest—William A. “Will”—departing Nova Scotia in 1911 after his brother Andrew’s death at Caledonia Mills. Altogether, six Chisholm brothers found employment as linemen or electricians with New York area utility or telephone companies.

Following the United States’ entrance into the First World War in April 1917, five of the six brothers enlisted for military service with the American Expeditionary Force. Charles was the first, joining an artillery unit in early May 1917. A second brother, Will, enlisted with the National Guard several days later. On May 19, 1917, Daniel enlisted with the 6th Regiment, US Engineers, at Fort Slocum, near New Rochelle, York, where was working as an electrician with a local utility company.

Early the following month, Hugh registered for the United States draft and was later assigned to the 501st Engineers’ Service Battalion. A fifth brother, Alexander, also enlisted with the 58th Artillery, also his brother Will’s unit. In November 1917, Hugh was the first of the five brothers to sail for France. Early the following month, Daniel departed for overseas, while the remaining three brothers made the crossing in early May 1918. 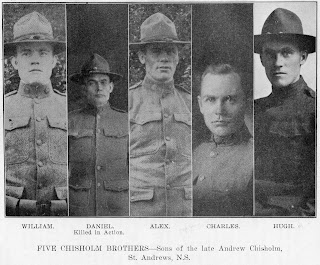 Following several months’ training, Daniel’s unit completed its first deployment in the forward area during the “Somme Defensive (March 21 - April 6, 1918), in support of British and French soldiers resisting the German “Spring Offensive east of Amiens, France. Before month’s end, Daniel was promoted to the rank of Corporal. 6th Engineers remained in the Amiens area until mid-June, at which time personnel relocated to the Champagne - Marne Sector, approximately 100 kilometres east of Paris.

The unit immediately commenced work on a defensive system at locations well within the range of German artillery fire. Over the next six weeks, personnel constructed rifle pits, fox holes, slit trenches and strong points in their assigned sector. By mid-July, work was “in an elemental stage” and personnel “scattered over the entire area” when events took a dramatic turn.

Shortly after midnight July 15, 1918, German artillery launched a massive barrage on the 6th Engineers’ sector. Company A—Daniel’s unit—was particularly hard-hit, as “German guns, small and large, were concentrated on [its] position to an extent never before experienced.” In response, personnel took shelter in emergency trenches located in the centre of their camp.

As the barrage continued, one shell struck the trenches, killing four and wounding many others. At 5:15 a.m., the Company received orders to move to trenches at a nearby farm and assume a position in reserve. If attacking German forces succeeded in capturing the nearby village of Crézancy, Company A would be called upon to launch a counter-attack.

The Company held its position into the following day, “the men that were not actually needed in the line [carrying] ammunition for a battery… which was directly behind the trenches.” At 2:00 p.m. July 16, personnel received orders to return to camp, “but on the way back… [were] spotted by an enemy scout plane, which later drew fire on the camp. This barrage set off an ammunition dump only 60 yards away, throwing missiles of death in and around the camp for more than an hour, killing four and wounding forty.” Later that night, “the dead were buried and the Company moved to [a nearby] hillside.”

Corporal Daniel Angus Chisholm was one of Company A’s July 16, 1918 fatalities. In the aftermath of his passing, his younger brother, Charles, shared the details surrounding his death in a letter to their oldest sibling, Roderick. According to Charles, Daniel was “following his squad to cover” when he “was killed by shell fire.” He was “buried with 16 comrades in separate graves with a cross and name affixed to each of them,” at a location two kilometers south of Crézancy and eight kilometers east of Château-Thierry, France.

Following the end of hostilities, Daniel’s remains and those of his fallen comrades were relocated to Oise Aisne American Cemetery, Seringes-et-Nesles, 20 kilometers north of Crézancy. Under a repatriation program implemented by the American government following the war, Daniel’s remains returned to the United States in July 1921 and he was reinterred in Cypress Hills National Cemetery, Brooklyn, NY.