A second son, Donald Drummond, joined the family on November 14, 1895. Alfred and Tina subsequently welcomed a third son and two daughters while residing at Sherbrooke. When gold mine production declined during the first decade of the twentieth century, Alfred moved the family to Saint John, NB, where he found employment as a bridge inspector with the Intercolonial Railroad.

Murray and Donald were inseparable during their early years, a pattern that continued after the outbreak of the First World War. Both enlisted for service with 6th Canadian Mounted Rifles at Amherst, NS on March 30, 1915. Their paths to the front line was rapid, the siblings receiving a transfer to the 55th Battalion (New Brunswick & PEI) six weeks later. Shortly after their new unit arrived at Camp Valcartier on June 15, Murray and Donald were selected for a reinforcement draft destined for the 1st Battalion.

The brothers departed for England on June 19 and arrived nine days later. Military commanders quickly recognized their leadership potential, Murray advancing to the rank of Lance Corporal on August 27, while Donald was promoted to Sergeant. They crossed the English Channel to France the following day, joining the 1st Battalion in the field on September 4, barely five months after their enlistment.

Murray and Donald served in Belgium’s Ypres Salient throughout the autumn and winter of 1915-16, receiving a quick introduction to the harsh realities of trench warfare. When German forces launched a massive assault on Canadian positions at Mount Sorrel, south of Hooge, Belgium on June 2, 1916, the 1st Battalion quickly returned to the line, remaining in reserve while its 1st Brigade comrades attempted unsuccessfully to recapture the lost ground.

Following a brief break from the forward area, 1st Brigade was called forward once more on June 11, in preparation for a second counter-attack on the German line. At precisely 12:45 a. m. June 13, Allied artillery launched a massive bombardment of the enemy’s front trenches. When the guns adjusted their trajectory 45 minutes later and targeted the support lines, the 1st Battalion’s soldiers advanced from their position in the support trenches, following the 3rd Battalion deployed in the front trenches across No Man’s Land.

The advancing Canadian units succeeded in dislodging the Germans from the recently captured position, doggedly repelling several counter-attacks and withstanding a brutal artillery bombardment throughout the daylight hours. The 1st Battalion sustained considerable casualties, retiring from the field on the night of June 13/14. As its Officers took stock of the unit’s losses, Lance Corporal Alexander Murray Fraser was among the soldiers reported “wounded and missing, believed killed.”

According to family descendants, Donald encountered his deceased brother’s body sometime during the fighting, but in the aftermath of battle his remains could not be located. Murray’s name is engraved on the Menin Gate, Ypres, Belgium, one of approximately 50,000 British and Imperial soldiers who died on Flanders’ battlefields and have no known final resting place.

Donald served with the 1st Battalion throughout the remainder of the year, relocating with the Canadian Corps to the Somme battlefields in September 1916. He was promoted to the rank of Company Sergeant Major on September 11, 1916, a remarkable achievement for a young man two months shy of his twenty-first birthday. Tragically, the war held a similar fate for Donald—he would not survive the following spring’s combat.

On June 10, 1916, Private Archie McIsaac was killed near Zillebeke, Belgium when an artillery shell struck a dugout in which he and seven other 25th Battalion soldiers were taking shelter. Born at Canso, Guysborough County on May 30, 1890, Archie enlisted with the 25th at Halifax, NS on November 18, 1914 and first entered the Belgian trenches with the 25th on September 22, 1915.

The unit served in the Belgian Ypres Salient throughout the autumn and winter of 1915-16, receiving its first introduction to combat on April 15, 1916, when German forces attacked its positions in the St. Eloi craters, south of Ypres. Two days prior to Archie’s death, the 25th relocated to the Zillebeke area, where German forces had captured Mount Sorrel, a significant area of high ground, on June 2. Archie was killed during a massive June 10 bombardment of the 25th’s line, and laid to rest in nearby Bedford House Cemetery.

The 25th went on to serve with distinction at the Somme (September - October 1916), Vimy Ridge (April 1917) and Passchendaele (October - November 1917), and participated in the massive Allied counter-offensive (August - November 1918) that led to the November 11, 1918 armistice. As no thorough history of the 25th’s role in the war currently exists, its role in the Canadian war effort has often been overshadowed by the 85th Battalion (Nova Scotia Highlanders), which did not land in France until February 1917, almost a year and half after the 25th’s Belgian deployment.

Two excellent books are available on the 25th’s war experience, edited/authored by Brian Tennyson, Department of History, Cape Breton University. The first, Merry Hell: The 25th (Nova Scotia) Battalion, 1914 - 1918, contains the memoirs of Captain Robert N. Clements, MC, who served with the unit throughout its time on the Western Front. The second, Percy Wilmot: A Cape Bretoner At War, chronicles the experiences of a 25th Battalion soldier. Both volumes are available online from Cape Breton University Press. 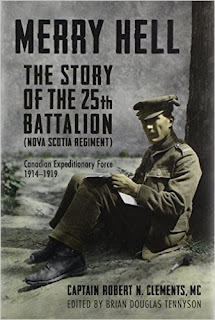 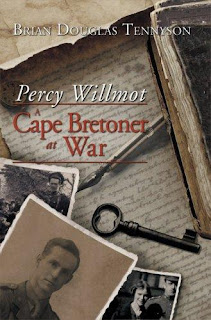 Posted by Bruce MacDonald at 13:31 No comments: