1. William John Gordon “Bill” Sinclair (2204425) was born at Goshen, Guysborough County on April 7, 1888. The fifth of William and Mary (Polson) Sinclair’s 10 children, Bill was one of four Sinclair brothers who served overseas during the war. He and his younger brother, Charles Hadden Spurgeon “Charlie,” were working in ore mines near Lowell, Arizona when they registered for the United States military draft on June 5, 1917. Rather than serve with American units, both chose to return to Canada and enlist, but headed in different directions.

While Charlie returned to Nova Scotia and joined a Forestry Corps draft in October 1917, Bill travelled westward and attested with the 1st Depot Battalion, British Columbia Regiment at Vancouver, BC on September 19, 1917. Upon arriving overseas, he was transferred to the 72nd Battalion (Seaforth Highlanders of Canada) and served with the unit in France during the final year of the war.

After returning to Canada, Bill married Lucy Vinton, a native of South River, Antigonish County. The couple initially resided at Isaac’s Harbour, where Bill tended the local lighthouse for several years, but later established a farm at Abercrombie, Pictou County, where they raised a family of seven children. Bill also worked as a superintendent with the Department of Highways. Bill Sinclair passed away at Aberdeen Hospital, New Glasgow on May 30, 1962 and was laid to rest in Abercrombie Cemetery.


2. Willard Creswell Horton was born at Roachvale, Guysborough County on July 31, 1892, the second of Moses Cook and Caroline Oressa “Carrie” (Nickerson) Horton’s eight children and their oldest son. In 1911, Willard departed for Boston, MA, where he enlisted with the United States 76th Division’s 301st Infantry Regiment on September 23, 1917. He served with the 301st in France and was discharged from military service on October 21, 1919.

Willard’s younger brother, Vernon Cecil, enlisted with the 106th Battalion. He was subsequently transferred to the Royal Canadian Regiment in France on March 1, 1917. Wounded near Lens on August 23, 1917 and invalided to England, Vernon never returned to the front. Following his recovery, Vernon completed musketry training. Promoted to the rank of Corporal, he served as a Musketry Instructor in England for the remainder of the war.


3. Edward Charles Cooke (2605873) was born at Isaac’s Harbour, Guysborough County on October 25, 1898 to Russell and Laurella M. (Langley) Cooke. The third child and third son in a family of 10—seven boys and three girls—Edward’s two older brothers, Byron and Orris, also served during the First World War. Edward attested with the Canadian Army Medical Corps (CAMC) Reinforcements at Halifax on September 27, 1917. At the time of his enlistment, Edward stated that he had previously served with the 82nd Regiment (Abegweit Light Infantry), a Prince Edward Island militia unit.

In February 1918, Edward was diagnosed with pulmonary tuberculosis, the result of a severe cold he developed while stationed at Camp Aldershot. He was immediately admitted to Kentville Sanatorium for treatment. On May 1, a Medical Board recommended that he remain in care for another two months. When Edward refused further treatment, he was transferred to the Casualty Company on May 17 and discharged as medically unfit on June 12, 1918.

Edward relocated to Pictou County, where he obtained employment at the Trenton steel mill. On August 29, 1918, he married Mary Ellen McKenna, a native of Antigonish, in a ceremony held at New Glasgow. The couple welcomed their first child, a daughter Margaret, in 1919. A second son, Edward, was born on October 23, 1922. The family eventually relocated to Halifax, where Edward earned a living in the merchant marine.

While he escaped the perils of First World War service, Edward’s merchant marine service placed him in a precarious situation during the Second World War. During the winter of 1942-43, Edward was working as assistant steward aboard SS Rhexener, a British merchant steamer carrying cocoa from Durban, South Africa to Britain via Freetown, Sierra Leone and Saint John, NB. Shortly after the vessel left Freetown, a German U-boat torpedoed the ship at 6:00 a.m. February 3, 1943.

The entire crew—a total of 70 men—abandoned ship in four lifeboats before the Rhexener sank. Using the stars to navigate, the survivors drifted westward for 1,200 miles. Three weeks later, the lifeboats sighted land and several days later came ashore at Antigua. In a remarkable feat of survival, only three crew members perished during the ordeal. Undaunted by this “near death” experience, Edward returned to sea, a January 31, 1945 Port of New York, NY document stating that he had served as “chief cook” aboard SS Tampico, a vessel that sailed out of Liverpool, NS, for one year.

In his later years, Edward relocated to Vancouver, BC, where his daughter, Margaret, had married and resided. He passed away there on March 4, 1968 at age 69.
Posted by Bruce MacDonald at 00:01 No comments: 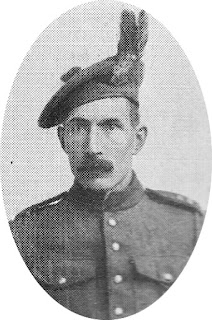 Joseph commenced training with the 85th Battalion at Halifax, NS on September 29, 1915. Considerably older than the majority of the unit’s recruits—he was 36 years of age at the time—he formally attested with the unit on November 1. Joseph spent the winter of 1915-16 training with the 85th at Halifax. The January 1916 formation of the Nova Scotia Highland Brigade delayed its overseas departure for several months. Joseph’s promotion to the rank of Sergeant on April 2, 1916 suggests that his superiors were impressed with his character and leadership skills. Two months later, the 85th’s personnel relocating to Camp Aldershot for a summer of drill alongside the Brigade’s three newly formed Brigade units.

Joseph was not aboard SS Olympic as the Highland Brigade departed for England on October 12. At the first of the month, health concerns led to his transfer to No. 6 Military District Depot, Halifax. A formal medical report, completed at Camp Aldershot two days prior to the Brigade’s departure, concluded that Joseph was suffering from “chronic bronchitis” and “phthisis pulmonis [sic - pulmonalis, aka tuberculosis].” The document also stated that Joseph’s health had been “aggravated by service” and as a result he was plagued with several “chronic” conditions. The report recommended admission to a sanatorium and formal discharge as “medically unfit.”

On October 23, Joseph was admitted to military hospital, where he remained in care for one month. Officially discharged from military service on December 23, 1916, he returned to Guysborough, where Dr. G. E. Buckley monitored his health. In an April 18, 1917 report to military authorities, Dr. Buckley confirmed the military’s preliminary diagnosis of pulmonary tuberculosis.

Joseph’s family apparently had a history of the disease, which the physician attributed in Joseph’s case to bronchitis contracted due to “exposure during camp life.” The prognosis was not promising: “He is losing some flesh and, unless [his] temperature subsides, must fail rapidly.” Dr. Buckley recommended “treatment in a Sanatorium under medical supervision,” if Joseph “recovers sufficiently to travel.”

Unfortunately, Joseph’s health continued to decline as the months passed. Sergeant Joseph Charles Morgan passed away at Guysborough on September 19, 1917 and was laid to rest in the local Methodist Cemetery. His younger brother and next of kin, William Henry Morgan, Guysborough, later received a Memorial Plaque and Scroll engraved with his name.