George C. Benight was born at Wine Harbour, Guysborough County, on April 10, 1898, the third of Annie (Boggs) and Lemuel Benight’s seven children. Caught up in the military excitement that swept Nova Scotia during the spring of 1916, young George enlisted with the Canadian militia at Halifax, NS, on April 13, 1916, and was assigned to the Composite Battalion’s “A” Company. 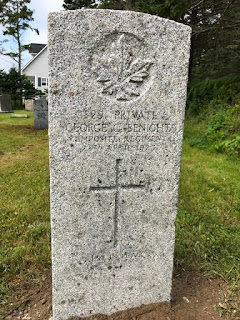 Within weeks of his enlistment, George was admitted to Rockhead Military Hospital with a case of measles, a common affliction in the crowded barracks. Following a period in isolation, he rejoined the battalion’s ranks and served the remainder of year without incident. Briefly hospitalized for treatment of tonsillitis in February 1917, George once again returned to duty and experienced no further health issues for almost one year.

On January 16, 1918, George married Jenny Pearl Young, a native of Halifax, NS. Six weeks later, he was hospitalized for treatment of influenza. Discharged to duty on March 8, he returned to hospital five days later, complaining of chest and abdominal pain. George subsequently underwent an appendectomy in early April and remained under medical care for the remainder of the month. Discharged to the Pine Hill convalescent facility on May 10, George soon developed pneumonia and tonsillitis, conditions that confined him to bed for almost two months.

During his time in hospital, George was transferred to the 6th Battalion, Canadian Garrison Regiment, the first step in proceeding overseas for service in France. His persistent health problems, however, prompted medical authorities to carefully examine his fitness for front-line duty. The ensuing report, dated September 26, 1918, concluded that George was suffering from “DAH”—“disordered activity of the heart”—a condition often described as “soldier’s heart.”

As a result, George was placed in Category CII—fit for labour service in Canada only. In response, George’s Commanding Officer recommended his discharge and military authorities concurred. On October 23, 1918, George was officially discharged from military service as “medically unfit.”

George and Jenny took up residence on Brunswick St., where George found work as a shoe-maker. For more than four years, life proceeded without incident. In the spring of 1923, however, the health issues that had plagued George’s military service returned. On April April 28, 1923, George C. Benight died “suddenly” at Halifax from “cardiac damage due to chronic myocarditis” and was laid to rest in Wine Harbour Cemetery, Guysborough County.

Within two weeks of George’s passing, military authorities agreed that his death was “related to service” and approved the provision of an Imperial War Graves headstone for his final resting place. George’s story is one of 64 profiles contained in Bantry Publishing’s First World War Honour Roll of Guysborough County, Nova Scotia, Volume II: 1918 - 1937, available for purchase online at bantrypublishing.ca .
Posted by Bruce MacDonald at 00:01 No comments:

During the Canadian Corps’ historic April 9, 1917 attack on Vimy Ridge, France, and in the days immediately following its capture, a total of seven Antigonish County soldiers perished in combat. At the end of each summary is a link to each soldier's profile on the Antigonish Cenotaph Project's blog. “We will remember them.”

1. Private Wendell Alexander MacHattie, son of Alexander John and Janet (Hattie) MacHattie, South River Lake, Antigonish County, was killed in action on April 9, 1917, during the 42nd Battalion’s assault on the sector of Vimy Ridge adjacent to Hill 145. His remains were never recovered from the battlefield. Wendell is commemorated on the Canadian War Memorial, Vimy Ridge, France. Antigonish Cenotaph Project profile.

2. Private William Alfred Rogers, son of William H. and Mary M. (Durant) Rogers, was killed in action on the morning of April 9, 1917, northwest of the village of Thélus, France, while serving with the 26th Battalion (New Brunswick). As with Wendell, William Alfred’s remains were never recovered. His name is also engraved on the Canadian War Memorial, Vimy Ridge, France. Antigonish Cenotaph Project profile.


6. Private Colin Chisholm, son of Donald A. and Margaret (Campbell) Chisholm, Brierly Brook, Antigonish County, was killed in action on April 12, 1917, during the 46th (South Saskatchewan) Battalion’s attack on “The Pimple.” Colin’s remains were never recovered from the battlefield. His name is inscribed on the Canadian War Memorial, Vimy Ridge, France. Antigonish Cenotaph Project profile.

Posted by Bruce MacDonald at 00:01 No comments:

Thomas Leo Dort was born at Canso, NS, on August 4, 1893, the third of Bridget Jane (George) and James A. Dort’s eight children. During the spring of 1916, military recruiters visited the coastal community for the first time, in search of soldiers for the 193rd Battalion, one of four infantry units that formed the Nova Scotia Highland Brigade. Thomas enlisted with the 193rd on April 6, 1916, and spent the summer months training at Camp Aldershot alongside soldiers from the 85th (Nova Scotia Highlanders), 185th (Cape Breton Highlanders) and 219th Battalions.

On October 12, 1916, the Highland Brigade’s soldiers departed from Halifax aboard SS Olympic. Following its overseas arrival, two of its units—the 193rd and 219th—were dissolved and their personnel re-assigned to existing battalions. Thomas was part of a reinforcement draft of 193rd soldiers transferred to the 42nd Battalion (Royal Highlanders of Canada) on December 5, 1916. He joined his new unit near Neuville-Saint-Vaast, France, in early January 1917.

Thomas served a regular rotation in the line with the 42nd until March 21, when he was admitted to No. 1 Canadian General Hospital, Étaples, for treatment of an “ischio-rectal abscess,” a problem that had plagued him for several years prior to his enlistment. Invalided to England three days later, he underwent surgery and quickly recovered. Transferred to the Canadian Convalescent Hospital, Woodcote Park, Epsom, on April 14, Thomas was discharged from medical care before month’s end and reported to the 20th Reserve Battalion, Shoreham.

Re-assigned to the 42nd’s ranks on June 19, Thomas returned to the Canadian Base Depot, Le Havre, France, but did not immediately rejoin his battalion. In early July, he was temporarily attached to the 3rd Entrenching Battalion and worked on a variety of projects near Arras, France, throughout the summer months. When the unit was dissolved in mid-September, Thomas reported to the Canadian Corps Reinforcement Camp, Villers-au-Bois, where he remained throughout the winter of 1917-18.

On March 4, 1918, Thomas was assigned to the 2nd Tramway Company, Canadian Engineers, and joined its ranks near Aix-Noulette, France, shortly afterward. One of two units that built, maintained and operated a network of small-gauge railways, its gasoline-powered trains moved ammunition and supplies to “dumps” in the forward area, carried troops into the front lines and transported wounded soldiers to field ambulance stations.

The Company’s “sappers” worked in the open, without the benefit of access to trenches or dugouts. As a result, hostile artillery fire posed a consistent threat while the men completed their daily tasks. The unit’s war diary reported a total of 13 “other rank” (OR) casualties during the month of May, a statistic that increased to 78 the following month, when an outbreak of “pyrexia” (trench fever) sent 30 men to field ambulance.

When Allied forces launched a major counter-offensive east of Amiens in early August, the tramway companies hauled large quantities of supplies to the front lines and constructed new sections as the advance progressed into German-held territory. Their work continued during a second offensive east of Arras at month’s end, 2nd Tramway reporting its first fatalities since Thomas joined its ranks—one OR killed and a second died of wounds, both the result of enemy artillery fire—during the first week of September.

In subsequent weeks, “construction continued with great rapidity” as the tramway units kept pace with the Canadian Corps’ advance toward Cambrai. In mid-September, however, Thomas reported to field ambulance for treatment of a bacterial infection and was evacuated to hospital at Étaples, France. Discharged to convalescent camp in mid-October, he contracted influenza early the following month and spent almost two weeks recuperating.

By the time Thomas was discharged from medical care, the November 11, 1918 Armistice had brought fighting to an end. As a result, Thomas crossed the English Channel before year’s end and reported to the Canadian Engineers Training Depot, Seaford. On February 23, 1919, he departed for Canada aboard SS Belgic and landed at Halifax one week later. Thomas was formally discharged from military service on March 24 and returned to Canso, where he resumed work in the local fishery.

On January 18, 1920, Thomas married Margaret Baker, a native of Tancook, Lunenburg County, in a ceremony held at Star of the Sea Church, Canso. For several years, Thomas experienced no health issues. By early 1926, however, he was under doctor’s care for treatment of “kidney, lung and heart troubles.” His condition slowly worsened and he passed away at Canso, NS, on April 2, 1926. He was laid to rest in Star of the Sea Parish Cemetery. 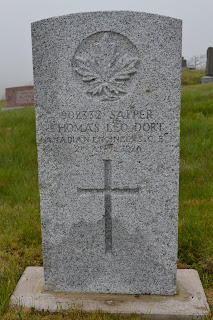 A note on Thomas’ death certificate stated that he had been “gassed and wounded during the Great War.” While his service record contains no record of specific treatment for either condition, military authorities subsequently agreed that his death was connected to his military service. Thomas’ story is one of 64 profiles contained in Bantry Publishing’s First World War Honour Roll of Guysborough County, Nova Scotia, Volume II: 1918 - 1937, available for purchase online at bantrypublishing.ca .
Posted by Bruce MacDonald at 00:01 No comments: