Three Guysborough County natives enlisted for service with No. 2 Construction Battalion on August 28 and 29, 1916.


1. Michael Redmond Elms was born at Upper Big Tracadie, Guysborough County on May 26, 1895, the son of John and Henrietta “Etta” Elms. He was working in the baggage room of North St. Station, Halifax, when he enlisted with No. 2 Construction Battalion on August 28, 1916.


2. David Borden was born at Upper Big Tracadie, Guysborough County on April 2, 1882, son of Lillian (Lydia) Borden. He enlisted with No. 2 Constuction Battalion at Halifax on August 29, 1916 and was married (wife’s name Ida) at the time of his enlistment.


3. Alexander Elms was born at Antigonish on February 28, the son of Mary Elms. The family had connections to the Upper Big Tracadie, Guysborough County area. Alexander enlisted with No. 2 Construction Battalion at Halifax on August 29, 1916.


All three recruits made their way to the battalion’s headquarters at Pictou, relocating with their comrades in September 1916 to Truro, where Alexander was briefly hospitalized for treatment of “Bell’s paralysis” in early December 1916, but made a complete recovery.

On March 25, 1917, No. 2 Construction Battalion boarded SS Southland at Halifax and departed for England, arriving on April 7. Alexander was admitted to the Canadian Military Hospital, Eastbourne, with a case of measles on April 21, but discharged to duty on May 5. All three proceeded to France with their unit on May 17, travelling to the La Joux forest near the French border with Switzerland and commencing service with Canadian Forestry Corps (CFC) units in the Jura District.

While Michael and David remained at Jura throughout the war, Alexander was part of a group of No. 2 Construction personnel transferred to CFC operations in the Alçenon District (Normandy) on December 31, 1917. The trio’s service in France was “without incident,” with the exception of Michael’s hospitalization for 12 days in mid-May 1918 with a “contusion” to his right foot.

No. 2 Construction personnel returned to England on December 14, 1918 and departed for Canada aboard SS Empress of Britain on January 12, 1919, arriving at Halifax ten days later. Michael Redmond Elms was discharged from military service on February 12, 1919. He found employment as a “sleeping car porter” on the Intercolonial Railroad and married Florence Williams at New Glasgow before year’s end. No further information is available on his later life.

David Borden was discharged at Halifax on February 15, 1919. Canadian officials later dispatched his service medals to Saint John, NB in 1922, suggesting that he was living there at the time. According to his military service record, he passed away on June 7, 1958. No further details are available on his post-war life.

Alexander Elms was discharged at Halifax on February 13, 1919. He married Bessie Blackburn at Halifax later that year. Alexander eventually returned to the Upper Big Tracadie area, where he passed away in 1984 and was laid to rest in the United Baptist Church Cemetery.

Posted by Bruce MacDonald at 14:58 No comments:

Joseph Palmer Clyke was born at Sherbrooke, Guysborough County on May 24, 1881, the son of Martin and Elizabeth Clyke. Both parents were deceased at the time of his enlistment. Joseph attested with No. 2 Construction Battalion at Truro, NS on August 22, 1916. Initially discharged as “medically unfit” due to “defective vision,” Joseph re-enlisted at Truro on February 2, 1917 and succeeded in passing the required medical examination.

Married with four children—two boys and two girls—at the time of enlistment, Joseph departed for England with No. 2 Construction aboard SS Southland on March 25, 1917, landing in England two weeks later. He proceeded to France with a large detachment of No. 2 Construction personnel on May 17, 1917 and proceed to the Canadian Forestry Corps’ Jura District, where he worked in its forestry and lumber operations for the duration of the war.

Joseph returned to England with No. 2 Construction on December 14, 1918 and departed for Canada aboard SS Aquitaine one month later. Following his discharge from military service at Halifax on February 13, 1919, he and his family relocated to Springhill, where Joseph worked in the local coal mines. 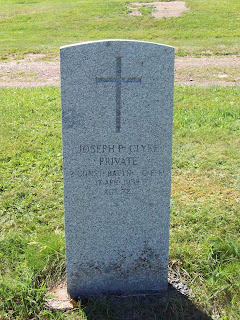 Joseph’s wife, Rachel Annie (Conley), passed away in 1925. The following year, he married Eliza Bell (Gero) Churnley, also a widow. Joseph retired in 1945 and passed away at Springhill on April 17, 1953 and was laid to rest in Hillside Cemetery, Springhill, NS.
Posted by Bruce MacDonald at 14:30 No comments:

1. James Desmond was born on August 1, 1897 at Guysborough, the son of Samuel Desmond. Both of James’ parents were deceased at the time of his enlistment with No. 2 Construction Battalion at Pictou, NS on August 18, 1916. A teamster by trade, he listed his grandmother, Mrs. Sarah Desmond, Guysborough, as his next of kin.

James departed Nova Scotia with No. 2 Construction Battalion on March 28, 1917 aboard SS Southland and arrived in England on April 7. Six weeks later, he crossed the English Channel to France with No. 2 Construction and followed the unit to the Canadian Forestry Corps’ operations in Jura District, near the Swiss border, where its personnel commenced work in the CFC’s forest and lumber mill operations. James was part of a detachment transferred in December 1917 to No. 1 Canadian Forestry Corps District, Alençon, where he and his comrades assisted in logging the Normandy forests. 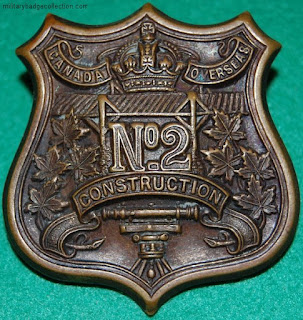 Following the November 11, 1918 Armistice, No. 2 Construction returned to England on December 14 and departed for Canada early in the New Year aboard SS Empress of Britain. The unit arrived in Halifax on January 22, 1919 and James was discharged from military service on February 15, 1919. James’ post-military life was cut short by illness. Stricken with pulmonary tuberculosis within months of his discharge, he passed away at Pictou, NS on August 12, 1919 and was laid to rest at Truro, NS.


2. Austin Kiley was born at Hazel Hill, Guysborough County on January 1, 1892, son of William and Mary Ann (Boudreau) Kiley. A steel worker by occupation, Austin enlisted with the 193rd Battalion at New Glasgow, NS on August 18, 1916. Austin has served for an unspecified period of time with the 94th Victoria Regiment (Argyll Highlanders), a local militia unit whose soldiers guarded key facilities in and around Canso following the outbreak of the war.

Several months later, medical issues eliminated any possibility of Austin serving at the front. He suffered from myalgia, particularly in his back and right side, and developed significant sores on his feet from marching in military boots. A pre-war injury—he severely fractured his index finger when his right hand was caught in a rock crusher—also affected his dexterity.

While in England, Austin met Isabella Forbes and received permission to marry on January 21, 1918. In early March, Austin was transferred to the Canadian Base at Buxton, where he awaited transport to Canada. He departed on April 9, 1918 and spent two months with the 6th Battalion, Canadian Garrison Regiment, before receiving a medical discharge from military service on June 18, 1918.

Austin’s young bride followed him home to Canada, the couple initially settling in Sydney, NS. They relocated to the United States shortly afterward, taking up residence at Hillside, Union, New Jersey, where Austin initially worked as a railway brakeman and later as a pipe fitter. He and Isabella raised four children—three sons and one daughter—in their family home. Austin Kiley passed away in New Jersey on September 23, 1956.
Posted by Bruce MacDonald at 09:49 No comments:

1. Matthew McGrath “Mack” Manson, born at Sherbrooke on May 30, 1899, son of Francis G. and Agnes (McGrath) Manson, enlisted with the 193rd Battalion at Camp Aldershot, NS. He never disguised his age of seventeen at enlistment and therefore remained in England until after his nineteenth birthday. Mack later served in France with the 85th Battalion during the later stages of the war. A detailed summary of his family background, war experience and post-war life is available elsewhere on this blog.


2. Frederik Hilton Paget, born at Hazel Hill on September 2, 1898, son of Frederick William and Eliza Maude (White) Paget, attested for overseas service with the Canadian Expeditionary Force’s Canadian Engineers at Canso, NS. A civil engineer at the time of his enlistment, Hilton received the commissioned rank of Lieutenant. No further information is available on his war service.

Post-war, Hilton relocated to San Francisco, California, where his mother was residing. Hilton enlisted at the University of California, Berkeley, graduating with a Bachelor of Science degree in Civil Engineering in December 1920. He married twice (Gladys & Muriel) and had one son, Curtis Hilton.

Hilton worked with survey crews in California’s mountains. He passed away at Trinity, California on September 16, 1949 and was laid to rest in the Odd Fellows Lawn Cemetery & Mausoleum, Sacramento, California. 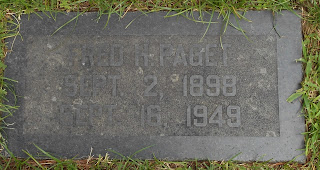 Posted by Bruce MacDonald at 16:57 No comments:

Alexander Benjamin Elms was born at Tracadie, Guysborough County on March 14, 1897, the son of Benjamin and Sarah Elms. Alexander enlisted with No. 2 Construction Battalion at Truro, NS on August 8, 1916. He arrived in England with the unit on April 7, 1917 and departed for France five weeks later.

Alexander served with the No. 2 Construction detachment dispatched to the Canadian Forestry Corps’s operation in the Jura District of France, close to the Swiss border. He returned to England with his comrades on December 14, 1918 and departed for Canada on February 20, 1919. The unit arrived at Halifax on March 1 and Alexander was formally discharged from military service on April 14, 1919.

Alexander never married, working as a labourer in various Nova Scotia communities. Alexander became ill in late 1929, and was admitted to Camp Hill Hospital, Halifax, suffering from chronic nephritis. He passed away in hospital, the result of heart failure, on January 19, 1930.
Posted by Bruce MacDonald at 13:02 No comments:

1. Ellis Howard Barss was born at Hazel Hill, Guysborough County on February 28, 1893, son of Robert and Frances Barss. Ellis served with No. 2 Company, Royal Canadian Garrison Artillery, Halifax, from April 11 to August 2, 1916, at which time he enlisted for overseas service with No. 8 Siege Battery, Royal Canadian Artillery (RCA).

Ellis departed Canada on September 21, 1916 and arrived at Liverpool, England two weeks later. After spending the winter in England, he crossed the English Channel to France on March 21, 1917, at which time his unit was re-designated No. 9 Siege Battery. Ellis was promoted of the rank of Bombardier on August 6, 1917, advancing to the rank of Corporal on March 1, 1918.

Ellis served in the forward area with No. 9 Siege Battery until September 24, 1918, at which time he returned to England for duty with the RCA’ Composite Brigade. He was appointed Acting Sergeant on November 1, 1918, remaining in England until February 1, 1919, at which time he departed for Canada. Ellis was discharged from military service at Halifax on March 1919.

Following the war, Ellis relocated to Dilke, Saskatchewan, where he took out a homestead and married Mary Alexandria Waddell in 1922. The couple subsequently raised a family of seven children: Robert Ellis, Margaret Mary, David Harold, Frances Elizabeth (Betty), twins Donald Allan and Douglas Bruce, and Dorothy Jean. The couple lived at Dilke until October 1948, when they sold their farm and moved to Regina, SK. Ellis Howard Barss passed away there on July 18, 1960.

2. Malcolm McKenzie was born at White Head, Guysborough County on June 24, 1898, the son of George Rufus and Etta McKenzie. Malcolm enlisted with No. 8 Siege Battery at Halifax alongside Ellis Barss, as the two men were assigned consecutive service numbers. No additional information is available on Malcolm’s military service or post-war life at the time of this posting.
Posted by Bruce MacDonald at 18:36 No comments: