Each soldier who served in the Canadian Expeditionary Force was paid a wage according to rank and location of service.  Throughout the entire war, the daily pay rate by rank was:

In addition to regular pay, a soldier serving overseas received a "field allowance" based on rank:

A soldier could also draw upon any money owed to him at any time during the month by requesting funds from the paymaster.  These payments were recorded in an "Active Service Pay Book" that was issued to each soldier.  This document was stored in his breast pocket of his tunic. 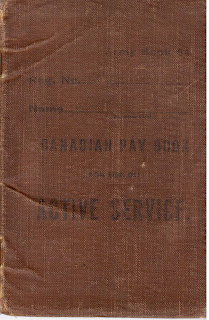 Pay Book of Pte. Edward Burns, Salmon River Lakes
Instructions on the first two pages outlined the rules and regulations concerning its use.  For example, if wounded and sent to a hospital, instructions stated that the pay book must remain in his possession. 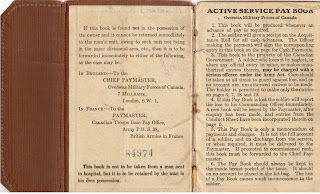 Instructions for Pay Book Use
A pay book also contained basic information about its owner - his name, address, next of kin, the name of the person to which a portion of salary was assigned and the amount, the soldier's unit, regimental number, rank, occupation, attestation date and religion. 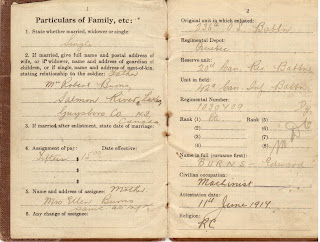 
The majority of the remaining pages were devoted to recording pay advances requested by the soldier.  Edward Burns' pay book lists several such payments, including one made on December 18, 1918 prior to "Leave to Brussels". 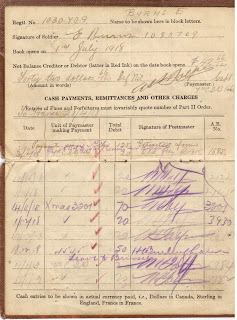 Record of pay advances from Pte. Edward Burn's pay book
The final pages of the pay book contained a sample will, along with instructions on the process for writing both a "formal" and a "military" will.  A "formal" will dealt with the soldier's property and possessions at home and was to be completed using an appropriate form in the presence of two witnesses and a "testator", likely a commanding officer.  A "military will" referred to a soldier's personal effects, including any wages owed at the time of death.  Edward's pay book indicated that on October 29, 1917 he completed a "Military Will" that was forwarded to the "Officer, i/c Estates Branch" in Canada for safekeeping.  A final page at the end of the pay book was used to record vaccinations and other preventive medical services administered to the soldier. 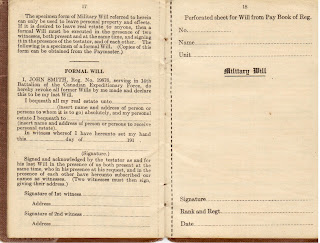 Instructions for Writing a Formal Will
At the end of the war, every soldier with at least six months overseas service or one year service in Canada received a gratuity based upon length of service and rank.  Payment to a private who had served overseas ranged from a maximum of $ 420 for three years or more service to $ 210 for less than one year service.  Pte. Edward Burns was eligible for a War Service Gratuity of $ 280.00.  This sum was paid in four monthly installments of $ 70 beginning on March 15, 1919, the date of his discharge.  Soldiers also received a separation allowance of $ 120.00, divided into four monthly payments.  In total, Pte. Edward Burns received the balance of his salary owed on discharge ($ 133.74), a War Service Gratuity of $ 280.00 and separation allowance of $ 120.00 , for a respectable total of $ 533.74 .

*****
* Sapper: A combat soldier who performed an engineering or construction task related to military activity.  For example, sappers built bridges, laid or cleared minefields, constructed field defences, billings, roads and airfields in addition to carrying out necessary repairs.  They were fully trained infantry soldiers who could be placed in a combat role when required. (Source: Wikipedia)

**: Batman: A soldier assigned to a commissioned officer as a personal servant. (Source: Wikipedia)

1. Campbell, Brenda.  "Lest We Forget: Reliving the Life of a Canadian Soldier".  Learning Centre, Library and Archives Canada.  (List of pay by rank obtained from this source.)