George Ernest Bingley was born at Fisherman’s Harbour, Guysborough County, on November 28, 1888, the oldest of Annie (Gibbs) and William Bingley’s five children. While the family relocated to Prince Edward Island several years after Ernest’s birth, he returned to Fisherman’s Harbour shortly after his father’s passing in March 1901 and spent the remainder of his childhood years in the home of his paternal aunt, Sarah (Bingley) Fenton.
As a young man, Ernest found work in the local fishery, but set aside his civilian occupation to enlist with the 193rd Battalion at Guysborough, NS, on April 6, 1916. After a summer’s training at Camp Aldershot, he departed for England with the Nova Scotia Highland Brigade on October 12, 1916. Shortly after its overseas arrival, the Brigade provided a draft of reinforcements for units in France. Ernest was among the soldiers selected for service and was assigned to the 42nd Battalion (Royal Highlanders of Canada). He joined his new unit in France on January 3, 1917.

Within days of arriving on the continent, Ernest was assigned to the 7th Canadian Machine Gun Company (CMGC) for “temporary duty.” During his time with the unit, its war diary described “the coldest [weather conditions] since the beginning of the war. Fuel being scarce does not add to the comforts of the troops.” A later entry prior to Ernest’s departure referred to a widespread outbreak of mumps in the area.

While Ernest rejoined the 42nd’s ranks in mid-February 1917, his time with 7th CMGC soon impacted his health. In early March, he was admitted to hospital with a case of mumps. During his time in care, he developed nephritis (kidney inflammation). Medical staff attributed the condition to “exposure to wet and cold,” no doubt during his CMGC assignment. On April 6, Ernest was invalided to England, where he was admitted to hospital.

Ernest’s condition slowly improved, prompting his discharge to a convalescent home in early May. While his health was stable throughout the summer months, military officials determined that he was no longer fit for service at the front. On September 15, Ernest was discharged from medical care and assigned to clerical work at the Canadian Army Medical Corps (CAMC) Depot, Shoreham. After five months at the facility, he departed for Canada aboard SS Delta II in late February 1918.

Upon landing at Halifax, NS, Ernest was assigned to the local Casualty Company, where he underwent a thorough medical examination. The resulting report indicated that, while Ernest had recovered from his kidney ailment, he was experiencing considerable pain in his upper back and both legs. Diagnosed with myalgia of indefinite duration, Ernest was assigned to “home service” at Halifax’s CAMC Training Depot.

Ernest spent the remaining months of his military service with the CAMC. Formally discharged on January 31, 1919, he returned to Fisherman’s Harbour and resumed work in the local fishery. On April 11, 1922, he married Hattie Mae Burke, a native of Drum Head, Guysborough County, and the couple welcomed their first child—a daughter, Myrtle Lillian—the following year.

While his service file contains no evidence of health issues following his discharge, Ernest fell ill within two years of his marriage. Diagnosed with tuberculosis, he was admitted to the Nova Scotia Sanatorium, Kentville, in 1924. In order to visit regularly, Hattie and Myrtle found accommodations nearby. Ernest remained under care for almost three years before he passed away from “tubrification of lungs and intestines” at Kentville on June 3, 1927. His remains were transported to Guysborough County, where he was laid to rest in Hillside Cemetery, Seal Harbour. 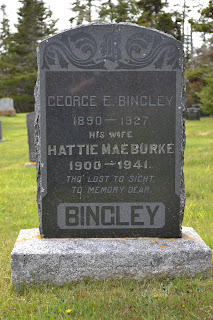